ASTILLEROS RÍA DE AVILÉS S.L. MAIN ACTIVITY IS THE CONSTRUCTION, REPAIR AND MAINTENANCE OF ALL TYPES OF STEEL SHIPS

The group ASTILLEROS RIA DE AVILÉS was established in 1945, resulting from the willingness and vocation to render service ⎯together with the familiar undertaking⎯, and it was decided from the very beginning to devote to the building and repair of any type of ships having a length overall up to 50 metres (in those years wooden hull ships). 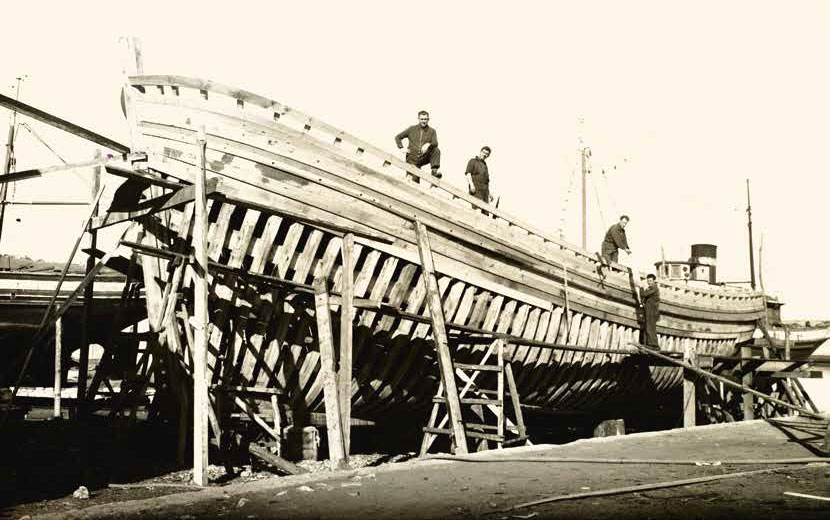 In 1970 the shipyard is granted with adjacent land concession to expand their premises to be able to house bigger ships and to conduct marine repairs and conversions, and building, likewise, a slipping way ⎯which at that time doesn’t exist⎯, to be able to put ships high and dry up to 70 m length overall, and 14.00 m breadth, which allowed the shipyard to contract bigger works and new clients becoming, this way, one of the firms of reference on the industry both in marine repairs and new building.

In 1976, a new 12,000 m2 yard adjacent to the port concession was purchased, wherein an industrial unit of 2,000 m2 was built for housing its own mechanical-, mechanizing-, adjusting-, steelworks- and welding workshops in order to improve the quality and efficiency of the marine repairs and conversions, allowing, on top, to start conducting any sort of works on any type of steel-hulled ships, such as fishing vessels, tugboats, dredgers, pleasure boats and also merchant ships.

In-between 1976 and 1984 more than 1,860 contracts for marine transformation and repairs were conducted, as well as lengthening works, both in steel hull ships and in wooden hull ships, with lengths ranging between 15 m and 70 m.

In 1984, after having conducting the relevant steps under the Ministry of Industry, the shipyard is entitled to build steel-hulled ships. Between that year and 2015 more than 396 ships, of all types, such as fishing ships, dredgers, barges, tugboats, supply, pilots boats, mooring boats, etc. were built.

In 1992 this group purchased in a public auction conducted by the “Social Care”, the premises of the former shipyard “Ojeda y Aniceto, Soc. Coop.”. This firm which had been closed for more than 7 years was located in the port of Avilés.  With this purchasing, its activity starts again and ships up to 86.00 m in length are built again.

These new facilities add more than 60,000 m2 of land, owned by the Group, and will continue, as we will see, improving and modernizing the Group capacity.

At the beginning, these new premises ⎯which already belonged to the Group ASTILLEROS RIA DE AVILÉS, S.L.⎯ will be exclusively devoted to the manufacturing of steel hulls for any type of vessels.

In addition to the shipbuilding, the Group ASTILLEROS RIA DE AVILÉS, S.L. combines this activity with marine repairs, having conducted between 1986 and 2010 more than 1,660 repairs on different types of ships, and different interventions, from which we can underline the following ones:

In 2008, after having obtained all the relevant permits and authorizations from the Port Authority of Avilés, ASTILLEROS RIA DE AVILÉS, S.L. was authorized to build a new slipping way, as well as its own fitting-out pier having a length of more than 105 m, as well as different additional industrial units and enlargements.

Namely, and also in 2010, ⎯ taking advantage of a generation replacement in a number of departments of the firm⎯ the continuity and strength of a consolidated entrepreneurial project was demonstrated, by starting a new commercial expansion phase which, from the very first moment, was marked by the toil, broadening its toils in the area of repairs and marine conversions; therefore Astilleros Ría de Avilés, S.L. has its own staff as well as premises and machinery of its own to carry out repairs of any kind without the need of subcontracting third parties.